The Covid-19 emergency changes day by day the way of teaching, sharing and preparing lectures (we talk about it here). Constraints different than the usual ones close many opportunities. Other opportunities emerge, which perhaps in times of free movements across libraries, classrooms, bookstores, archives, we would not have considered.
A small example.
For the master’s course in History of Art (Sapienza University, Rome, Italy), I am teaching in e-learning on the theme of contemporary art and games.
The lecture of March 12, 2020, dedicated to Marcel Duchamp, addressed an episode of gamification organized for Duchamp’s exhibition Re-made in Italy in 2013 at the National Gallery of Modern Art in Rome. A series of activities with the public – inspired by the works on display – sought to suggest some of the playful devices of the French artist’s works (anagrams, rebuses, contrèpeterie, palindromes etc.), involving visitors in personal and group challenges.
The title of that afternoon of play in the gallery was Tu m’inviti, and referred to Duchamp’s painting Tu m’, made in 1918 and now preserved in the Yale University Art Gallery (New Haven, Conn.).
The museum’s website reads a concise and effective presentation of the painting, created for the collector Katherine Dreier, and which over time has become a gym for interpretations and readings. 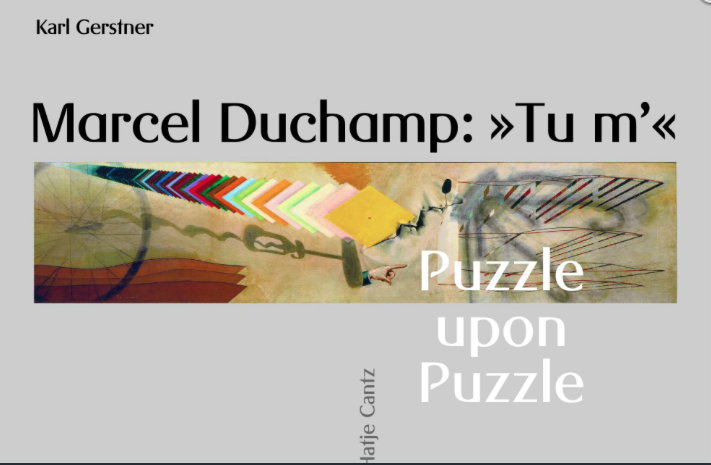 The last painting on canvas by the French artist, Tu m’ stages the shadows of some of his famous ready-mades; a row of rhomboid color swatches; a hand with the index finger pointed (painted by a sign painter); a trompe-l’oeil cut in the canvas sutured by a real pin; a real bottle brush protruding outwards, leaving a shadow on the painting and in the room.
Considered as a meditation on pictorial art, on perspective, on representation, on imitation, on illusionism, on the boundaries between the two and the three dimensions, this enigmatic painting (Puzzle upon puzzle, a monograph defines it) launches a bait starting with its title.
An abbreviated form of the expression “Tu m’emmerdes” (“You bug me”) or “Tu m’ennuies” (“You are annoying me”), the phrase – of which we only read the beginning – is considered a sort of Duchamp’s farewell from painting on canvas, to which he would no longer dedicate himself.
But it is also an invitation to the viewer to integrate the title with the “verb you want on the condition that it begins with a vowel” (Subrizi, Laterza 2008). In this article by Susan Barbour, Duchamp’s Long Shadow. The Secret Meaning of Tu m’, it is proposed, not without an erotic and conceptual aspect, “Tu m’excite” (You excite me): 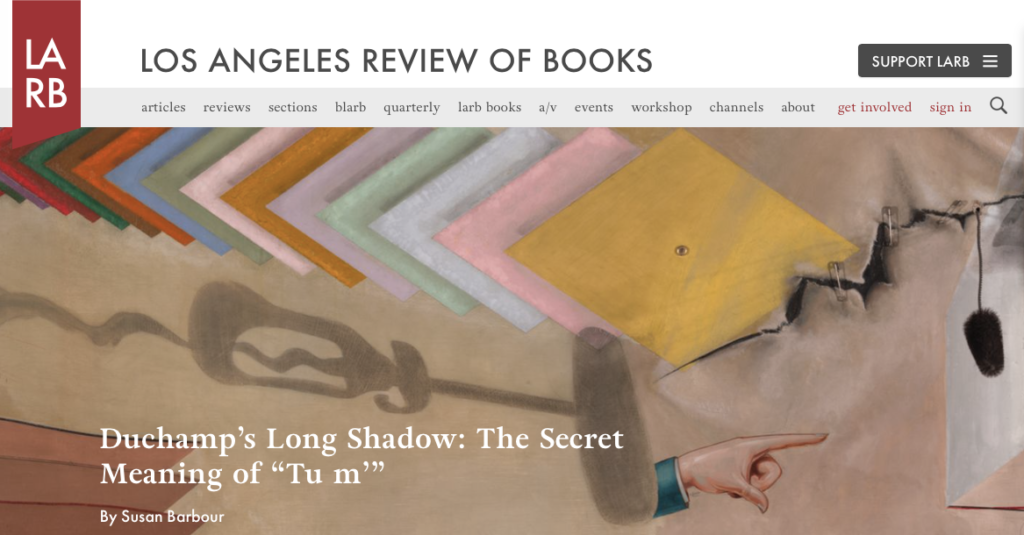 In short, while I invited students to complete the title in Italian by reasoning about the possible subject, I tried to verify how Google’s autocomplete function continued the sentence. 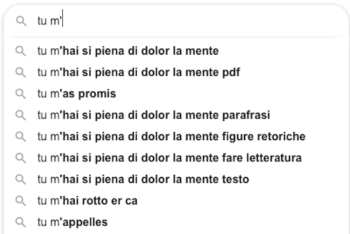 In the image above you can see the answers: the most repeated is the first line of a sonnet by Guido Cavalcanti (1250-1330), the Florentine poet friend of Dante.
The sonnet is the VIII in the edition of his Rhymes edited by Domenico De Robertis (Einaudi, 1986):

The comment underlines the appeal with the “You” to the woman and “the condition of dismay and death, implying the usual abandonment of the heart by the soul and vital faculties, with consequent reduction of any physical manifestation to that of an automaton”. 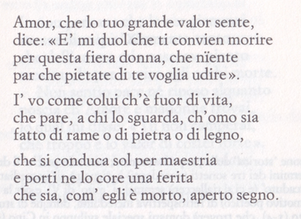 Now, if you open the answers on Google’s autocomplete feature, you realize that the frequency of occurrences is due to the search for paraphrase of the sonnet by high school students. This is a statistical and contingent datum, of course, but which triggers the hypothesis of a connection: what if Duchamp, a learned multilingual librarian, had read and memorized the opening words of Cavalcanti’s composition?
In French (quotation comes from a modern edition):
Tu m’as si rempli l’esprit de douleur / que l’âme s’empresse de partir (Imprimerie Nationale, 1993, ed. Christian Bec).
At the beginning of the 20th Century, Cavalcanti was then at the center of the interest of the American poet Ezra Pound, who since 1910 had been working on the translation of Cavalcanti’s sonnets and ballads, published in 1912: Sonnets and Ballate of Guido Cavalcanti (Stephen Swift & co, London) with an introduction that illuminates his method of approach and also renders the original text sound (THOU fill’st my mind with grief so populous / That my soul irks him to be on the road).

When it will be possible to move across libraries and archives again, the research will be able to continue, to verify if and how much Duchamp knew Cavalcanti – in Italian, in French, in the version of Ezra Pound (both Pound and Duchamp would have been portrayed by Man Ray, in the first 1920s). And to investigate the possible affinities and transmigrations of the conceptions of love, eros, spirit  (see Giorgio Agamben, Stanzas) from medieval culture to Duchamp’s subtle inframince thought.
But in the meantime, a link between the French artist and the Florentine poet is lit by Google’s suggestions, established by the queries of the people who feed them by creating masses of connected data. And if some users disable the completion function for privacy reasons, for others it is a form of verification of information and a starting point of social game, between statistics, serendipity and big data.
Antonella Sbrilli