The Gallerist is a board game designed by Vital Lacerda, here analyzed as a case study related to the Contemporary Art History course “Finding another game: the theme of ludic in contemporary art”, held by Prof.ssa Antonella Sbrilli at Sapienza University of Rome.
Born in 1967 in Lisbon, Vital Lacerda has a Master’s Degree in Marketing and Advertising. In 2006 he decided to try his luck as a freelance graphic designer. Board game design is his greatest and most loved passion.  He realizes all the games starting by specific themes. Besides The Gallerist, his most famous projects are Vinhos, Kanban and Lisboa.
In order to realize Tha Gallerist, devoted to contemporary art market, Lacerda called a group of contemporary artists to realize some cards of the game. The game elements are made paying attention to details.
The goal of The Gallerist is to gain and maximize money, to discover artists, to promote them, and to build international reputations. As a result, the player tries to achieve the respect needed to draw visitors to his Gallery. The game should last approximatively 120 minutes. The minimum and maximum number of players needed for a game are respectively 1 and 4. The game is suitable for persons ages 13 and older. However, after a game-session, it emerges that The Gallerist effectively takes around 180 minutes for a game to finish and it is more an adult oriented game – most likely to be appreciated by an ‘élite’ public – because of the complexities of the rules and game elements.
This ludic typology does not follow either a route-type or a dungeons-type: it is composed of a set of combinatorial actions to play in four different locations and not necessarily in order. 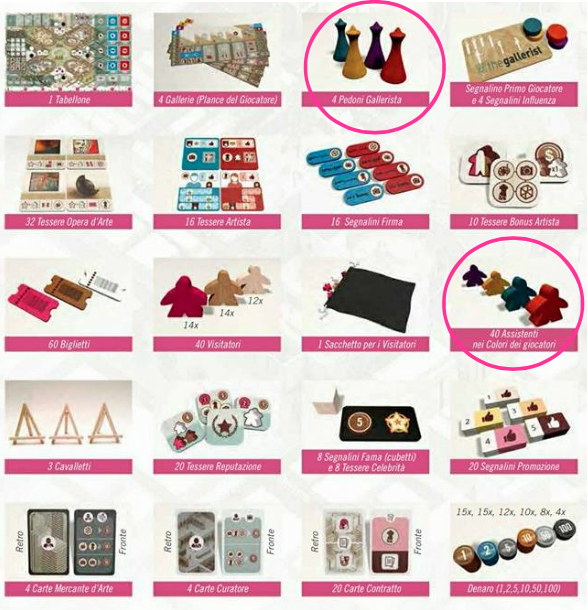 Based on the art market dynamics, The Gallerist presents some analogies and differences with the reality. The initial phases of the game reflect reality: the gallerist can discover artists, promote them by media and sell works of art in international markets; on the other hand, in the game there is not any hypothetical phase concerning the donation of works of art to Museums or public Institutions.
Analyzing The Gallerist according to the four categories of game by Roger Caillois, there is a predominant of mimicry: the player has to identify himself in the gallerist figure, and this can cause impersonations similar to role-play games; as far as agon is regarded, it seems to be replaced by collaboration, necessary to fully exploit the possibilities offered by the game, in order to reach a balanced market; alea can occur only if the strategies of a player annoy the ones of other players; ilinx is completely absent, because The Gallerist is a management game that does not include sudden emotional changes. 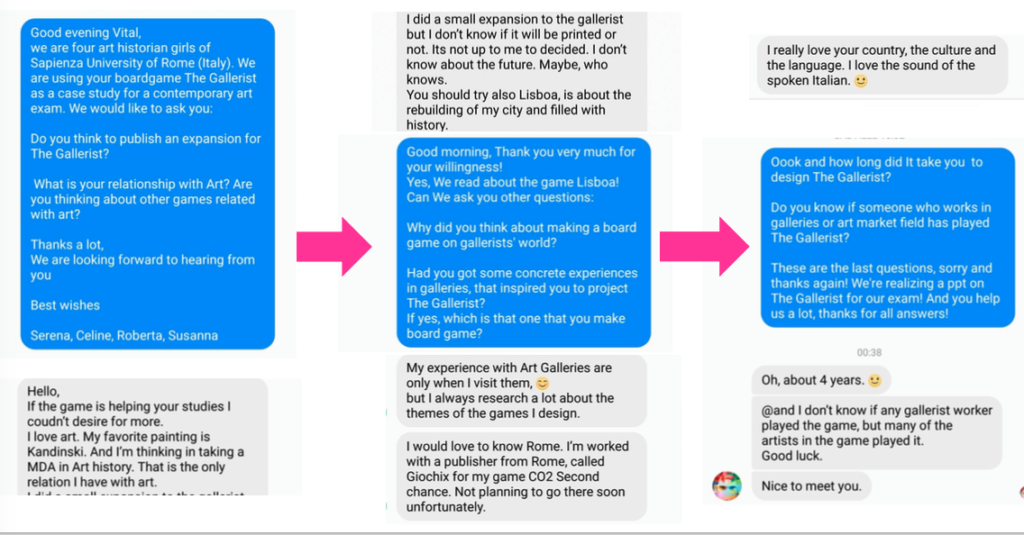 As art historians interested in art market, we think that – in order to live a more immersive and active experience of The Gallerist –  some basic knowledge of the subject can help.
We would like to end by thanking Vital Lacerda, who has been very kind to answer our questions, talking about his favorite artists and his method.
If we can share some ideas for an expansion pack, we suggest:
the activation of the collector figure, as a Non-Playing Character or as an active member of the art market, in addition to the gallerist figure; a simplification of the rules and a version with real artists!
Roberta  Allegrini, Susanna Correrella, Serena  Cozzi, Celina Tavella (Art Historians, Rome)